It was a wild election night in Caldwell and Boise.

Gun owners turned out in droves in one race and stunned political pundits.

The Caldwell race was of particular concern to gun owners as the head of the Idaho Democrat Party attempted to hide her identity and win a local election. Her plan failed when gun owners exposed her as a radical leftist who supported every major gun control politician and candidate alive.

It was a race that many did not know how it would turn out.

Runoff elections generally have an even lower turnout than a general city election.

Last night however there were actually more voters in the Caldwell runoff race than the general election race last month. 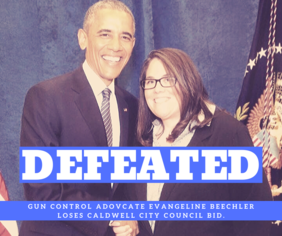 In Boise, the story was much different. Challenger Lauren McLean defeated incumbent Mayor Dave Bieter is a landslide victory 66% to 34%.

McLean is as far-left as you can possibly get.

She is a major supporter of Bloomberg’s Moms Demand Action and was endorsed by Planned Parenthood.

Is this the beginning of the end for Boise? Is Boise well on its way to becoming the next Seattle or Portland, and giving up any chance that it can maintain a strong pro-2nd Amendment voting base?

There is no question that Idaho is changing very rapidly.

Voters who care about freedom, and more importantly their 2nd Amendment rights, had better start getting involved in all elections in Idaho. Idaho’s population continues to explode and there is no telling what that means for our gun rights in the future.

Some want to blame all the Californians moving to Idaho, but we know firsthand that many are fleeing California and other west coast states to enjoy the freedoms here.

Sure, some anti-gun voters are moving here and there is nothing we can do about that.

Idaho is too great of a state to let radical gun grabbers overrun us.

We implore to you become more involved with defending your gun rights.

If you have not already, sign up as a member of the Idaho Second Amendment Alliance today!

Better yet, become one of our Liberty Members ($10 or more a month) and show the gun grabbers mobilizing in Idaho that our numbers are far greater than theirs! You can become a Liberty Member by clicking on the link here!

We are proud of the hard work and dedication that gun owners showed last night in the Caldwell race.

For now, Caldwell has one less radical gun grabber that will not be on their city council.

Are you paying attention to your local races? If not, you better start!

Thank you all again for your amazing dedication to the pro-2nd Amendment fight here in Idaho.

Enter To Win A Lifetime Membership For FREE!