The day that gun grabbers have feared is finally here.

Bloomberg, Moms Demand Action, and government entities have done everything they can to kill H.B. 444, Stand-Your-Ground.

Your grassroots activism and pressure is paying off.

However, before that day, we need your help in a major way — more on that in a second.

In addition to H.B. 444 having a public hearing in the House State Affairs Committee, Senate Bill 1313, the watered-down Stand-Your-Ground bill, will also have a hearing right after H.B. 444.

That means the committee will hear both bills on the same day!

This allows you to attend the hearing and testify on both bills.

Here’s what we know for sure folks regarding these two bills: One of them expands your ability to defend yourself, and the other one does not.

In fact, the sponsoring Senator for S.B. 1313, Senator Todd Lakey, said just yesterday on the Senate floor that they did the “minimal” amount of changes as possible from what current law is.

And as you all know, the current law just isn’t enough.

As a reminder, the image below shows you the differences between the two bills. 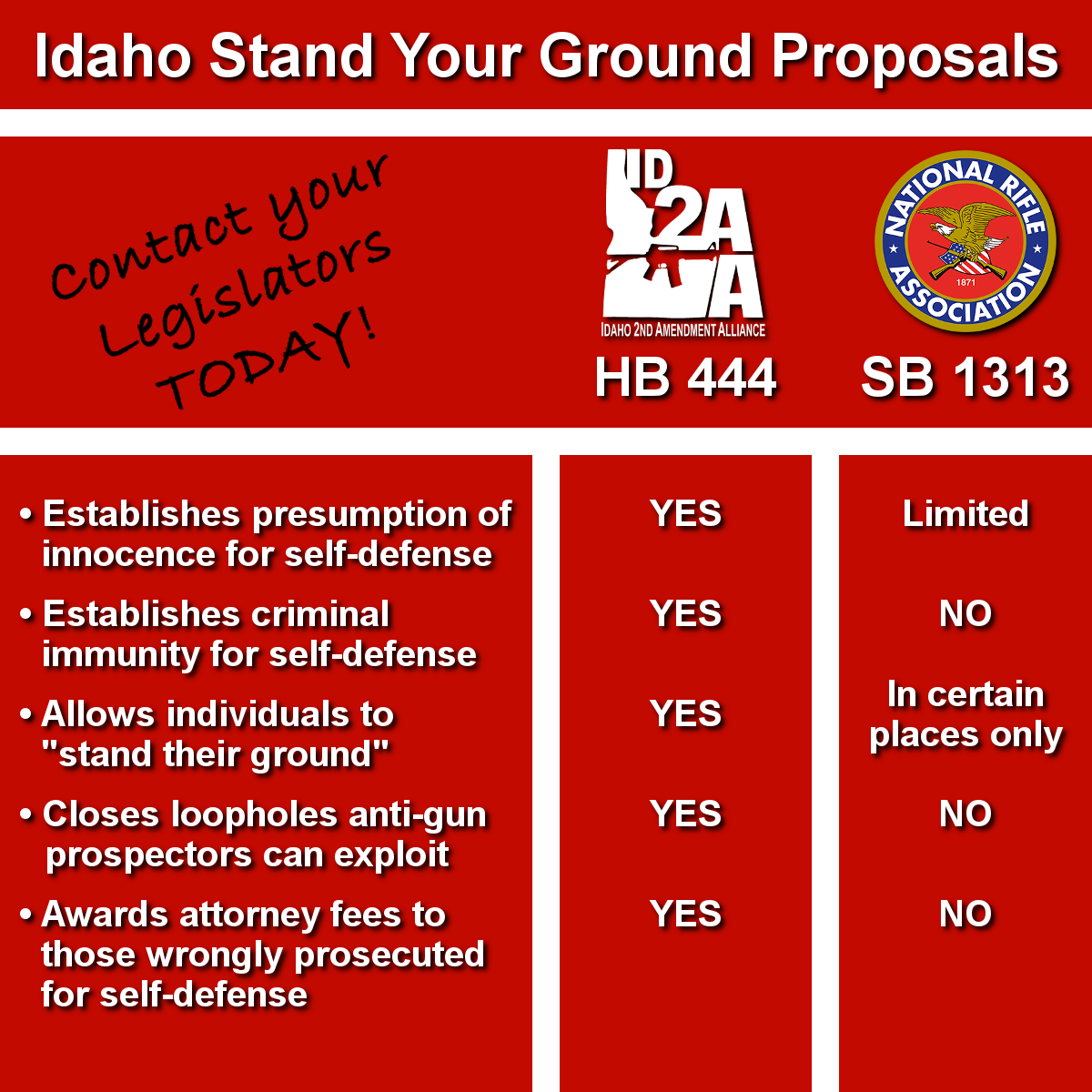 There is only one clear choice for a real Stand-Your-Ground bill, and that’s H.B. 444.

So why do some establishment Republicans not want H.B. 444 if it is better?

The truth is that H.B. 444 holds the government accountable, and prevents abuse against citizens who act in self-defense.

But their primary excuse appears to be that, “The current system is just fine.”

Folks, we have MAJOR news about that claim.

In addition to case law that has already shown our Stand-Your-Ground law is weak, we have found a case of a woman whose husband has been in prison for 10 years, in Idaho, for defending his wife and children from violent thugs.

Our attorney, Alexandria Kincaid, and ISAA President Greg Pruett have interviewed the woman extensively and are looking through court records to find out exactly what happened.

Folks, based on their preliminary interviews, this woman’s husband stood his ground against a couple of violent thugs and protected his family as we all would.

Instead of continuing his life, he has now been in prison for over 10 years!

The man appealed his case years after his incarceration and a judge agreed that the man’s defense team did him a great disservice, and that some of his sentence should be commuted!

There is much more to this story that left Alexandria and Greg’s jaws dropped to the floor, and you’ll know exactly what they are talking about when you hear her story on Tuesday.

I couldn’t believe what I heard myself when Greg told me the story.

Folks, this brave woman has agreed to fly to Boise from northern Idaho to testify at the Stand-Your-Ground hearing!

We can’t imagine how hard this must be for her to have to re-live the entire ordeal all over again in the public eye.

We told the woman that we would pay for her flight, hotel, and food while she is in Boise.

But we need your help to cover these costs!

We are looking to raise about $800 in expenditures to cover everything she will need, and we need you guys to step up big time!

You guys have been a huge help all year, and we know you’ll step up again to help this brave woman get to Boise to testify.

The hearing on Tuesday is going to be monumental, and having both bills heard at the same time is unprecedented.

Thank you and let’s keep this fight going.

Seth Rosquist
Chairman of the Board
Idaho Second Amendment Alliance