The election season is in full force, and every legislative candidate has been surveyed.

The results of those surveys are in, and it’s your opportunity to see if your candidate answered our survey, and find out if they did so with 100% pro-gun answers.

We’ll get to the results in a moment.

Gun grabbers have mobilized across Idaho ladies and gentlemen!

From Sandpoint, to Boise, to Pocatello, gun grabbers are desperate to turn Idaho into the next Oregon or Washington.

In fact, this billboard from northern Idaho just popped up on Facebook yesterday! 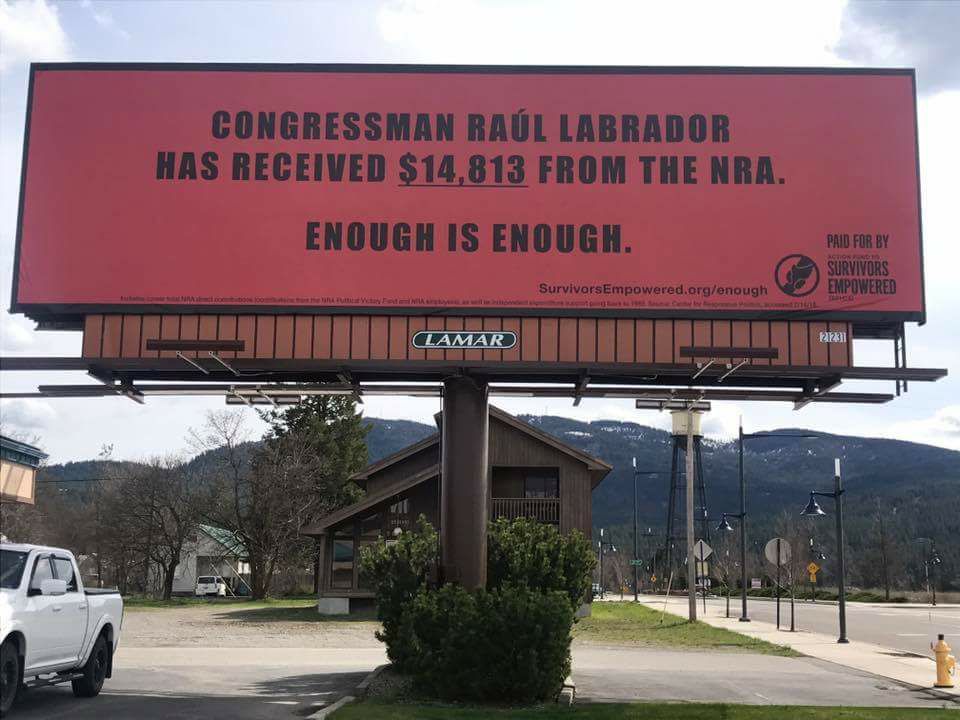 The group running the billboard is another gun grabbing organization, likely under the direction of Michael Bloomberg, that wants to shame gun owners who support pro-gun candidates.

It isn’t in California or New Jersey.

Make no mistake, Bloomberg has his eyes our beautiful state.

With our neighbors to the west completely under the influence of gun control zealots, Bloomberg can move into other states who are still standing strong for the 2nd Amendment.

Idaho is the fastest growing state in the country and many people who do not share our ideals continue to move here.

When they move here, they demand that we change our gun laws to be the same as those they just left.

We have been warning gun owners about this coming fight for many years, and now it is here.

That’s why our elections program, and the growth of this organization is so important.

The only thing standing between gun grabbers overrunning this state, and our strong pro-gun laws, is you!

And that all begins with making sure that gun owners turn up at the polls at election time, and vote against any candidate who doesn’t support the 2nd Amendment 100 percent.

The results of the survey are in, and you have the chance to see where your candidate stands, if they returned the survey at all.

Some candidates, afraid to take a stand, won’t return our survey..

Other candidates returned the survey but do not support the 2nd Amendment 100 percent.

Finally, there were many that answered our survey with 100% pro-gun answers.

You have to decide which candidates you will support in the May and November elections to protect and restore the 2nd Amendment in Idaho.

>>> The results of the survey can be found by clicking on the link here!

>>> Next, we need your help to mobilize even more gun owners across the state to combat the  mobilization of Bloomberg’s.

If you can, become a Lifetime or Gold Member today!

However, we know not everyone can afford to join at that level.

We also have a Silver and Bronze Level Membership that may be more affordable for you right now.

If you are already a member, then please consider a special donation to help us with our elections program as we continue our fight to expose gun grabbers, and inform voters about who is and is not pro-gun!

No matter what you can do, we appreciate your help.

The primary elections are on May 15th, which is less than a month away.

Stand up. Fight back. Join the ISAA today!

P.S. Gun grabbers are mobilizing across Idaho and are doing everything they can to shame gun owners.

This billboard recently went up in Coeur d’Alene.

It’s time for gun owners to fight back and that begins with the election survey results you can find here!

How did your candidate do?

Finally, we need you do join up with the Idaho Second Amendment Alliance right away, and help us with our last major mobilization effort before the primary elections on May 15th!