Red Flag laws are all the talk in Congress and in the 2nd Amendment community right now.

Gun owners are opposed to Red Flag laws in all forms.

There is no version of a Red Flag law which won’t put the United States on a very dangerous path to tyranny.

That’s why the Idaho Second Amendment Alliance has been speaking out against them for years. Giving the government the ability to confiscate your firearms without having convicted you of a crime by a jury of your peers is unconstitutional and dangerous.

Even some Republican politicians are beginning to support Red Flag Gun Confiscation Orders.

President Trump has indicated he favors them.

Sen. Rubio and Sen. Graham have also been drafting legislation to bribe the states to implement some form of Red Flag laws.

While we fully anticipated spineless cowards like Graham and Rubio to support them, we didn’t anticipate more “conservative” Congressmen to also come out in favor of them.

Rep. Crenshaw is a decorated Navy Seal Veteran and his support for these unconstitutional orders comes as a shock to many gun owners.

The reality is that the swamp can corrupt and change the best people with the best intentions.

After a severe backlash from gun owners, Rep. Crenshaw did what any politician would do, he backtracked and tried to explain away his views on Red Flag laws.

Worse yet, Rep. Crenshaw seemed to blame you for being upset with his support of Red Flag laws!

In a recently released Instagram video, Congressman Crenshaw gave details of what he wants to see in a “good” Red Flag Gun Confiscation Order.

In response to his video, ISAA President Greg Pruett released a “reaction” video and blasted Rep. Crenshaw and destroyed his arguments for Red Flag laws.

You can see that video by clicking the link here or clicking on the image below. 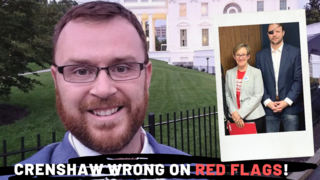 Folks, the bottom line is this, there is no version of Red Flag laws which you should accept.

Whatever phony “protections” Congressional Republicans put in the bill, they will ultimately be stripped away once states have adopted them.

Make sure that you keep up the pressure on Congress and President Trump to oppose any and all forms of Red Flag laws.

Be sure to share the video above and let your Congressmen know that you disagree with Rep. Crenshaw, and any other Republican who favors these unconstitutional laws.

Learn How to Help Us!