You would think this candidate would be running for office in a more progressive city like Seattle, Portland, or San Francisco. However, this candidate is trying to win an election in Idaho.

And this isn’t the first time she has tried to win here.

Evangeline Beechler ran for City Council in Caldwell previously in 2017. She also ran for Idaho State Senate in 2018.

Now Beechler is running for Caldwell City Council again in a runoff election on December 3rd.

But Beechler isn’t just any candidate.

And she isn’t just your run of the mill Idaho Democrat either. She is as radical and progressive as they come, and supports nearly every major gun grabbing candidate that you could possibly imagine.

If that wasn’t enough, she also REFUSED to fill out our candidate survey last year in the 2018 Idaho Legislative race for District 10.

Candidates who don’t fill out the survey always have some gun control stance they don’t want known by the voting public.

She refused refused to say where she stands on the private sale of firearms, Constitutional Carry expansion, preemption laws, standard capacity magazines, and so much more!

To top it all off, a video has recently been uncovered where Beechler admits in a public forum that Democrats are using non-partisan city elections to get more radical candidates elected into office. 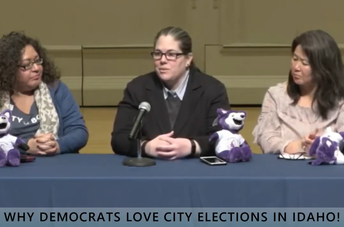 This law is allowing some radical candidates to go unnoticed in city elections.

Folks, this is how gun rights are lost over time. These radical candidates get into your city elections and you never know about it.

You must do more research on every candidate running for office, no matter the election. Local elections can’t be ignored!

On December 3rd Cadlwell residents will be voting at the Canyon County Election’s Office (8 a.m. to 8 p.m.) to determine if Evangeline Beechler will represent them on the city council.

Be sure to share the video above and send this email to anyone you know living in Caldwell.